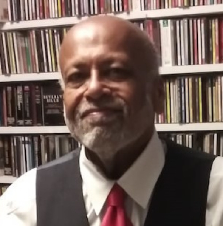 William Henry Curry makes his NCO conducting debut with Sancturary Road. He is the Music Director and Conductor of the Durham Symphony. For twenty years Maestro Curry was the Resident Conductor and Summerfest Artistic Director of the North Carolina Symphony.

A native of Pittsburgh, Curry started conducting and composing music at age 14. His first major appointment was at age 21 when he was named Assistant Conductor of the Richmond Chamber Orchestra. On the same day, he was called in to replace a conductor who suddenly became ill for a performance of Beethoven’s Symphony No. 9. He went on to serve as Resident Conductor with the Baltimore Symphony, St. Paul Chamber Orchestra, and New Orleans Symphony.

Maestro Curry was appointed Associate Conductor of the Indianapolis Symphony in 1983, a post he held until 1988, the same year he was named winner of the Leopold Stokowski Conducting Competition and performed in Carnegie Hall. He was feature conductor for the tour and recording of Anthony Davis’s Grammy-nominated opera X. He has also conducted opera productions with the New York City Opera, the Houston Grand Opera and the Chicago Opera Theater.

Maestro Curry is also a composer. The Indianapolis Symphony Orchestra premiered his Eulogy for a Dream, based on the speeches and writings of Dr. Martin Luther King Jr.