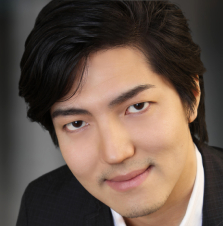 Baritone Takaoki Onishi made his NCO debut in the dual roles Dancaïre and Moralès in Carmen (2019) and returned to the company as Silvio in Pagliacci (2020).

He is a former member of the Ryan Opera Ensemble of Lyric Opera of Chicago. He made his debut there as Father Arguedas in the world premiere production of Jimmy López’s Bel Canto, which was later telecast on PBS. He remained with the company for three seasons and appeared in Rigoletto, Les Troyens, and Roméo et Juliette.