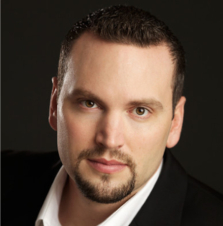 Tenor Scott Quinn made his NCO debut as Cavarodossi in Tosca (2019). During the 2021-22 season, he joins both Houston Grand Opera and Pittsburgh Opera as Don José in Carmen, and Florentine Opera for the Duke in Rigoletto.

Recent performances include Edgardo in Lucia di Lammermoor with San Antonio Opera, Elemer in Arabella with San Francisco Opera, the Duke with San Diego Opera and Kansas City Opera, Don José with Seattle Opera, Rodolfo in La bohème with Utah Opera, Alfredo in La traviata with Austin Opera, and both Camille in The Merry Widow and Oscar in the American premiere Gareth Williams’s Rocking Horse Winner at Opera Saratoga.

He maintains a close association with Houston Grand Opera and recently returned to create the role of Villiers, Duke of Buckingham in the world premiere of Carlisle Floyd’s Prince of Players. He also sang Pirelli in Sweeney Todd and Tamino in Die Zauberflöte. He is an alumnus of the Houston Grand Opera Studio. During his tenure, his performances included Rodolfo, Alfred in Die Fledermaus, Mr. Erlanson in A Little Night Music, among others.

He has appeared with Arizona Opera, The Atlanta Opera, Minnesota Opera, Ft. Worth Opera, Palm Beach Opera, and Chautauqua Opera.