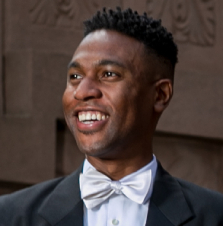 Baritone Malcolm J. Merriweather makes his NCO debut in Paul Moravec and Mark Campbell’s Sanctuary Road. He appears on the Grammy-nominated recording of the work conducted by Kent Tritle on the Naxos label.

He is Music Director of The Dessoff Choirs. He has led the group in performances of Ildebrando Pizetti’s Requiem, Margaret Bonds’s The Ballad of the Brown King, David Lang’s The Little Match Girl Passion, Vaughan Williams’s Dona nobis pacem, and world premieres by composers Eve Beglarian, Douglas Geers, and Matthew Aucoin celebrating the bicentennial of the birth of poet and journalist Walt Whitman, among many others. He conducted the choir on a recording of Margaret Bonds: The Ballad of the Brown King & Selected Songs on the AVIE label.

He made his Mostly Mozart debut conducting the West Choir in a world premiere of John Luther Adams’s In the Name of Earth.

Dr. Merriweather is also the Artistic Director of “Voices of Haiti,” a 60-member children’s choir in Port-au-Prince that is operated by the Andrea Bocelli Foundation. He has led the group in performances with Andrea Bocelli at Madison Square Garden, Teatro del Silenzio, and for Pope Francis at the Vatican.

He is an Associate Professor, Director of Choral Studies and Voice Department Coordinator at Brooklyn College of the City University of New York.