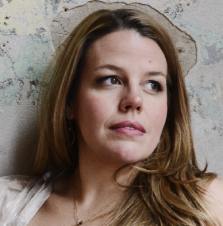 Soprano Andrea Edith Moore brings to her performances an “opalescence that is particularly served by her impressive phrasing and inherent musicality” (operagasm.com), and “wows audiences with her powerful and flexible soprano voice, her acting ability, and her dedication and drive” (CVNC). Andrea has enjoyed a wide range of collaborations with artists and ensembles including Vladimir Ashkenazy, David Zinman, Eighth Blackbird, Bill T. Jones/Arnie Zane Dance company, the Hamburger Kammeroper, My Brightest Diamond and the Red Clay Ramblers.

Equally at home in the music of our time and of the distant past, she has starred in roles ranging from The Governess in Britten’s Turn of the Screw, Micaëla in Carmen, Countess Almaviva in Le nozze di Figaro, and Sara in Higdon’s Cold Mountain. An accomplished concert soloist, she has garnered particular acclaim for her interpretations of the Bach Cantatas and German Lieder, at venues including the Teatro Colon, Baltimore Lieder Weekend, Duke Chapel, and Richard Tucker Foundation.

Andrea’s commitment to voices from her native North Carolina has led her to commission, premiere, and perform composers including Kenneth Frazelle, Daniel Thomas Davis, Sue Klausmeyer, Robert Ward, and numerous others. She produced, premiered, and developed Family Secrets: Kith and Kin by Daniel Thomas Davis with UNC and NCO. Andrea is especially proud to have released Family Secrets Kith & Kin in her debut recording hailed by Fanfare Magazine as “A major new work… Five stars: A fascinating new chamber opera… Moore’s singing is hauntingly intense.” And American Record Guide calls it, “a slice of southern culture that could easily pass under your radar, and that would be unfortunate.”

Andrea is a prizewinner in the Metropolitan Opera National Council Auditions, was a fellow with four-time Grammy-winning ensemble Eighth Blackbird at the Blackbird Creative Lab and has twice received the Yale School of Music Alumni Award. She holds degrees from Yale University, Peabody Conservatory of Music at The Johns Hopkins University and UNC School of the Arts.